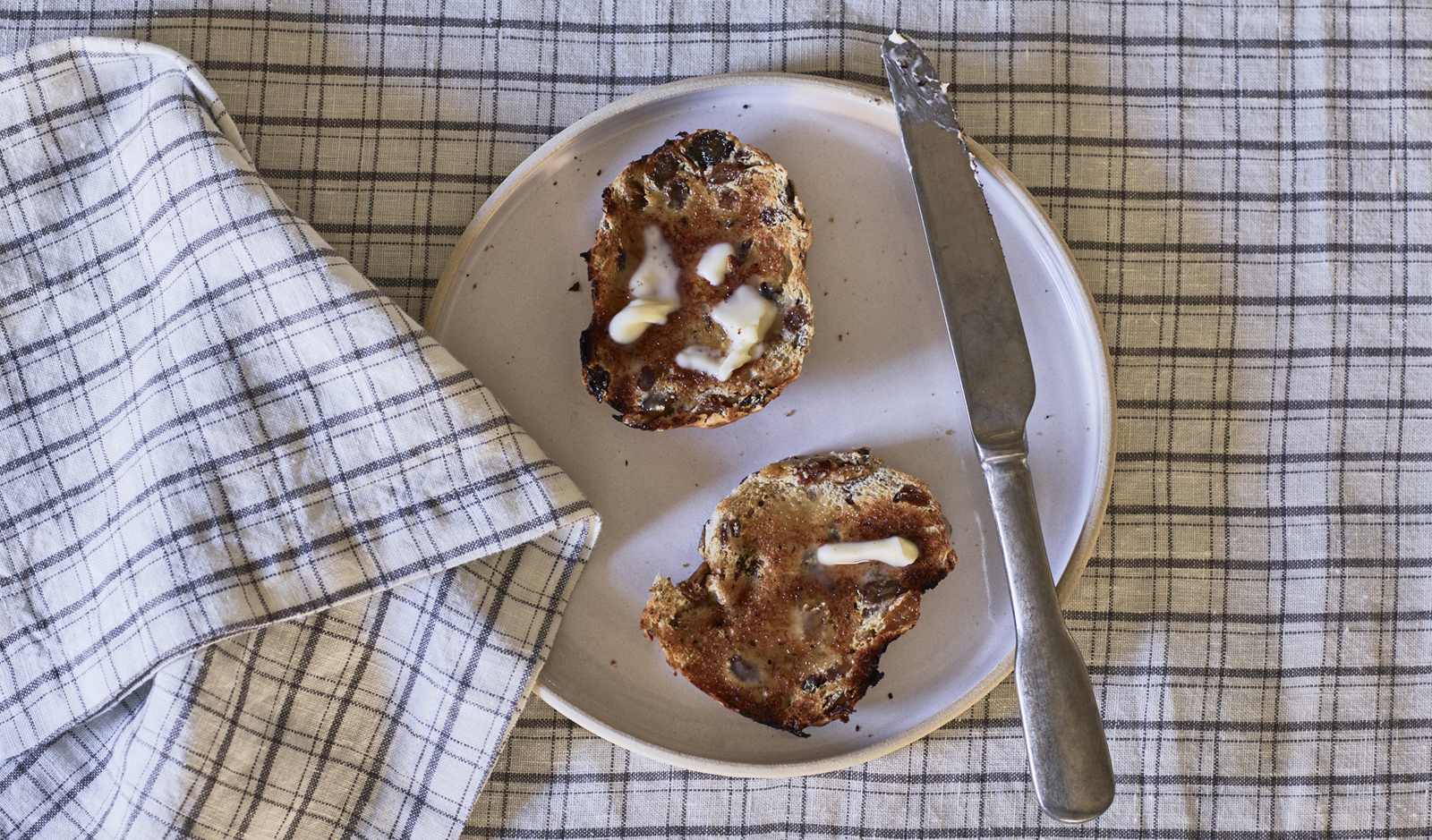 Though there are many recipes to be found that shall guide you step by step to homemade hot cross buns, we stray never from this one here. It is the result of two hand-me-down family recipes, blended together. One part passed from granny to grandson and the other from grandpops to granddaughter that our founders compared, contrasted and from there created their very own version baked with currants, cranberries and memories of their respective childhoods. It is with this ingredient list and series of steps, stood in their cottage kitchen, that they always bake a batch of buns to see them through the entirety of the long Easter weekend.

The zest of one large orange

A sprinkling of salt

1. Tip the flour and sugar into a large mixing bowl, then on one side add the salt and on the other, the yeast. It’s important to keep them separate as they simply don’t get along.

2. Separately, add the milk, butter and orange zest to a small glass bowl and heat on the stove or in the microwave until the butter has turned to liquid. The aim here is not for the mixture to be too hot, just warm enough to melt.

3. Pour the liquid into the flour bowl and mix for less than a minute so that it combines – with a dough hook should you be using a mixer or with a wooden spoon if by hand.

4. Now add a beaten egg and mix once more. This time, for five minutes. We tend to to this by hand, and so knead using a lightly oiled surface (not flour as this made ours turn tough one year) for between five and ten minutes.

5. Stir through the currants and cranberries before sprinkling the cinnamon, stirring just long enough so that they’re interspersed.

6. The dough needs to rest (as you might too!) in a ball, in a bowl that’s lightly oiled, and covered with cling film in a warm room (or proving drawer if you’re fortunate enough to have one) for 1-2 hours. It should double in size.

7. Once proving time is up, section the dough into buns however big or small you fancy, shaping them into a neat ball. We tend to do between 15-20 – some purposefully much smaller for our 18-month year old.

8. Drop them onto baking sheets lined with parchment and then pop inside a clean carrier bag to prove for one more hour. They’ll likely spread when baking but you can simply tear them apart.

9. In the final 15 minutes of proving, we tend to put the oven on to preheat to 200 degrees. As it heats, you can make the cross to pipe on top.

10. Mix the flour and water (you can add more flour if it seems too sloppy) using a fork until you reach a thick paste. If you have a piping bag, dollop it into there with a small round nozzle. Otherwise, go freehand, and pipe a cross on every proved bun.

11. Into the oven they go to bake for roughly 20 minutes. During which, you can prepare the sticky marmalade glaze that goes on top by simply warming up at least three heaped tablespoons of marmalade.

12. When the buns are baked, quickly spread the marmalade on top of every one using a pastry brush, and then tuck in with a home-baked bun in one hand and a cup of tea in the other!