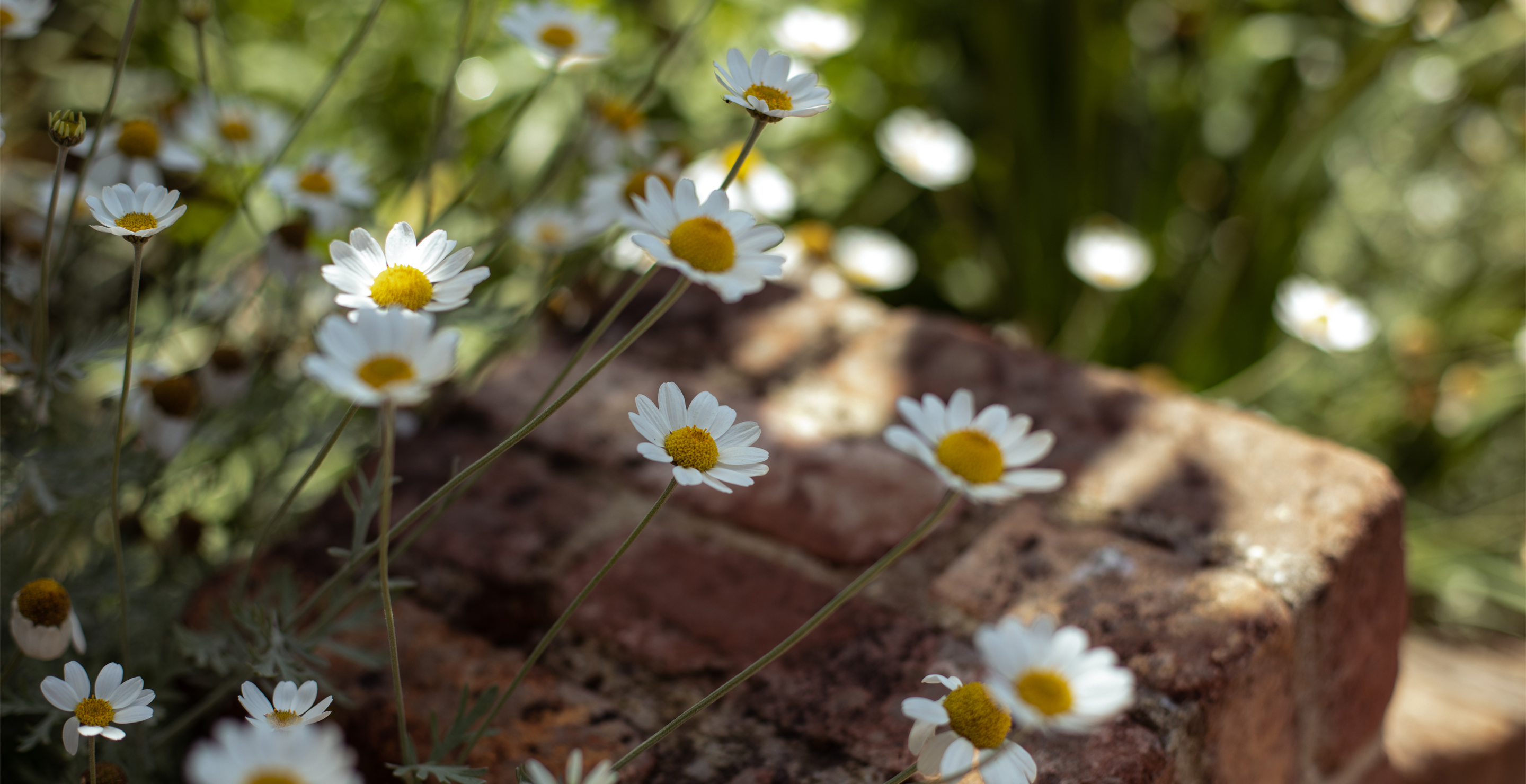 As brighter days are well and truly bestowed upon us (long may it continue) the garden bursts into abundance. From the front garden to the back – colours pop, shoots shoot and, this summer, we’ve welcomed some new friends too (more of those shortly…). There’s also the nightly watering that becomes such a welcome ritual at this time of the year and, of course, the scent of an evening garden that we can enjoy while doing so. 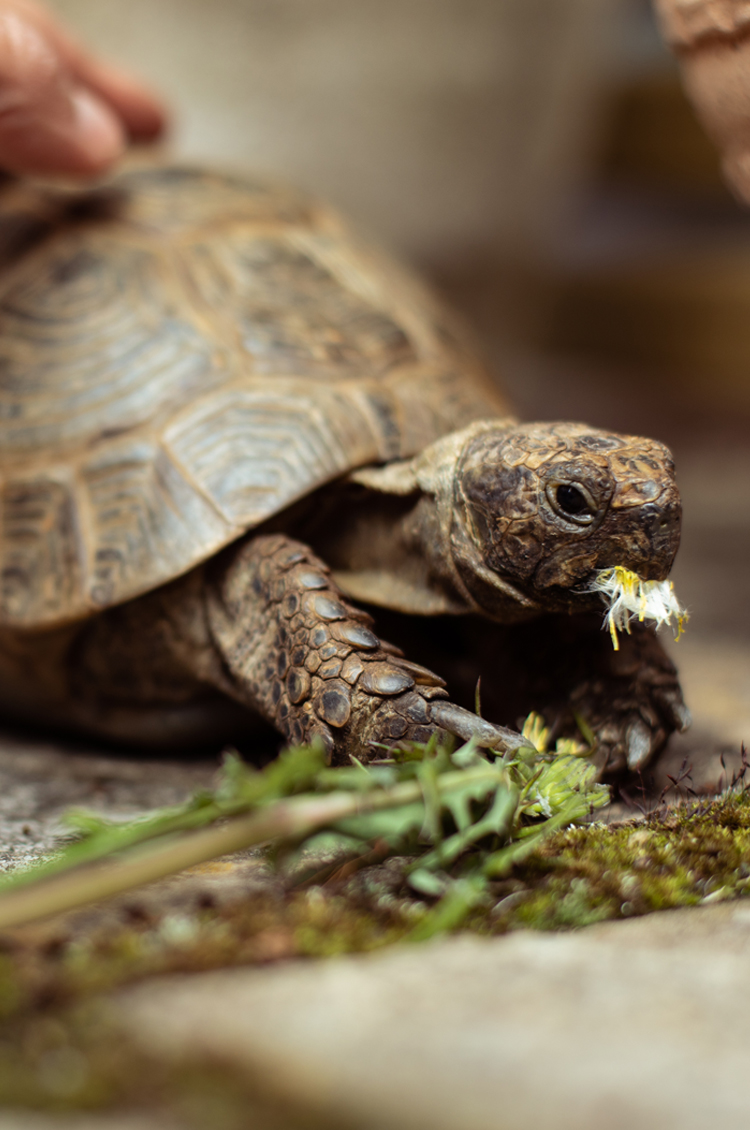 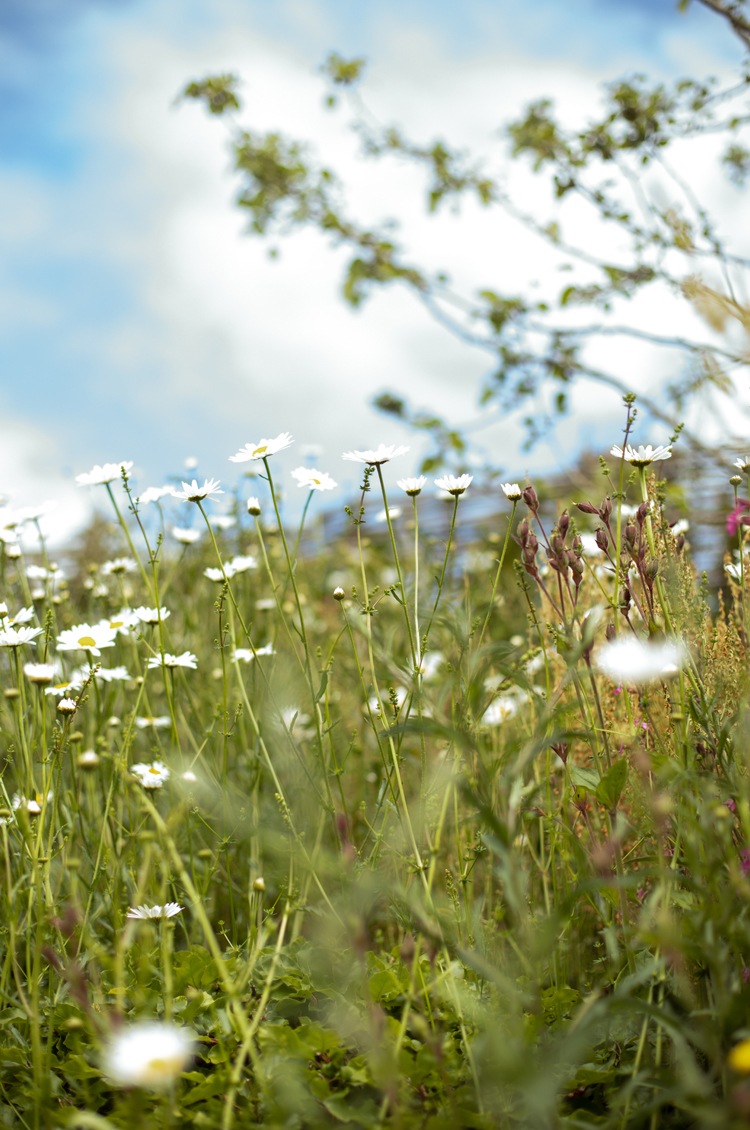 The first thing to note are said new friends that we’ve welcomed to the fold – two tortoises that we’ve rehomed, named Wilma and Cherry – now fully fledged members of the family. It’s just lovely to see them enjoy some of the things that have grown in the garden as well as how much Alma and Agnes love tending to them. They seem to be particularly fond of the bind weed, which is perfect as that’s a horror to get out of garden beds. Aside from that, Cherry seems to have an appetite for Rose petals, and Wilma for Buttercups. They live on the patio in milder climes but when it’s chillier they’ll go into the greenhouse, though they’re forever trying to sneak into the house when the doors are open.

Beneath the pear, apple and plum trees the little meadow of wildflowers has sprung to life providing a haven for bees and butterflies. The tortoises’ favourite weeds grow amongst the Oxeye Daisies, Buttercups and Dandelions so they tend to frequent this spot. 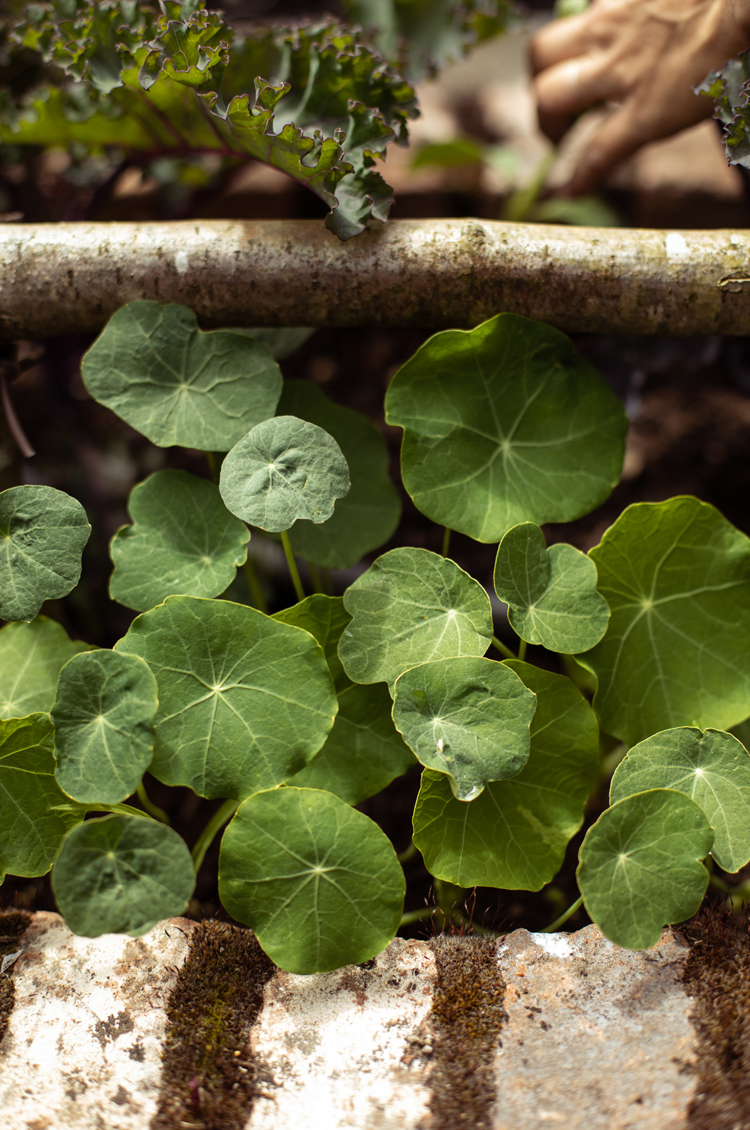 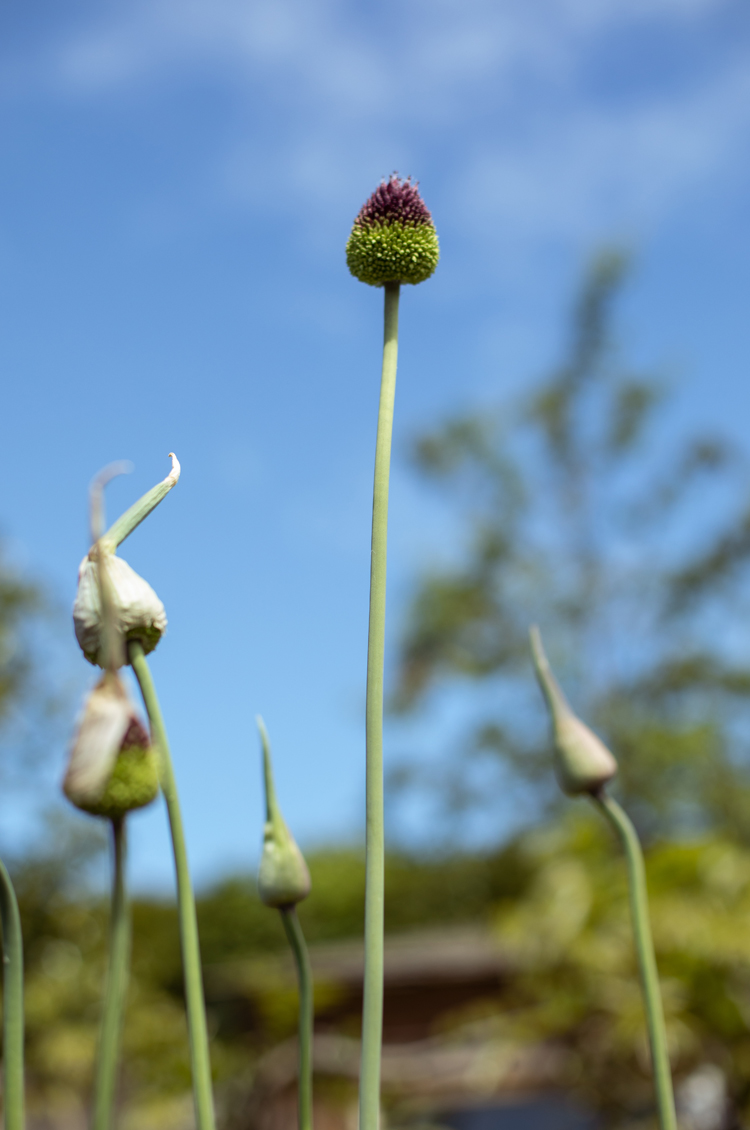 Where colour is concerned the yellow Viola, outside the greenhouse, is still flowering and has been going for quite a while now – it’s always a welcome addition to little bud vases in the house. Meanwhile Astrantia and Nasturtium enliven the garden with vibrant pops and the funny little hats of the Allium Forelock are starting to fall off and reveal such lovely colours underneath. I’ve had the Sambucus tree for four years now, from when it was a small plant, and every year the colour of the foliage against the bare plaster wall is just divine. It’s now flowering in a powdery pink and seemingly still very happy to be in a pot as it just keeps growing!

I’ve started tying the Purple Peas to their structure as they’ve shot up to the top and it’s been a little windy of late. They look a little like a Sweet Pea, though not as fragrant unfortunately, and as the lovely purple flower fades underneath is what looks like a purple Mangetout which makes for a charming addition to summer feasts. The Forced Rhubarb is in full-swing now so I’ve been bringing some to the office for everyone to try. The Artichokes have really come to life too – I just love the element of shape they add. 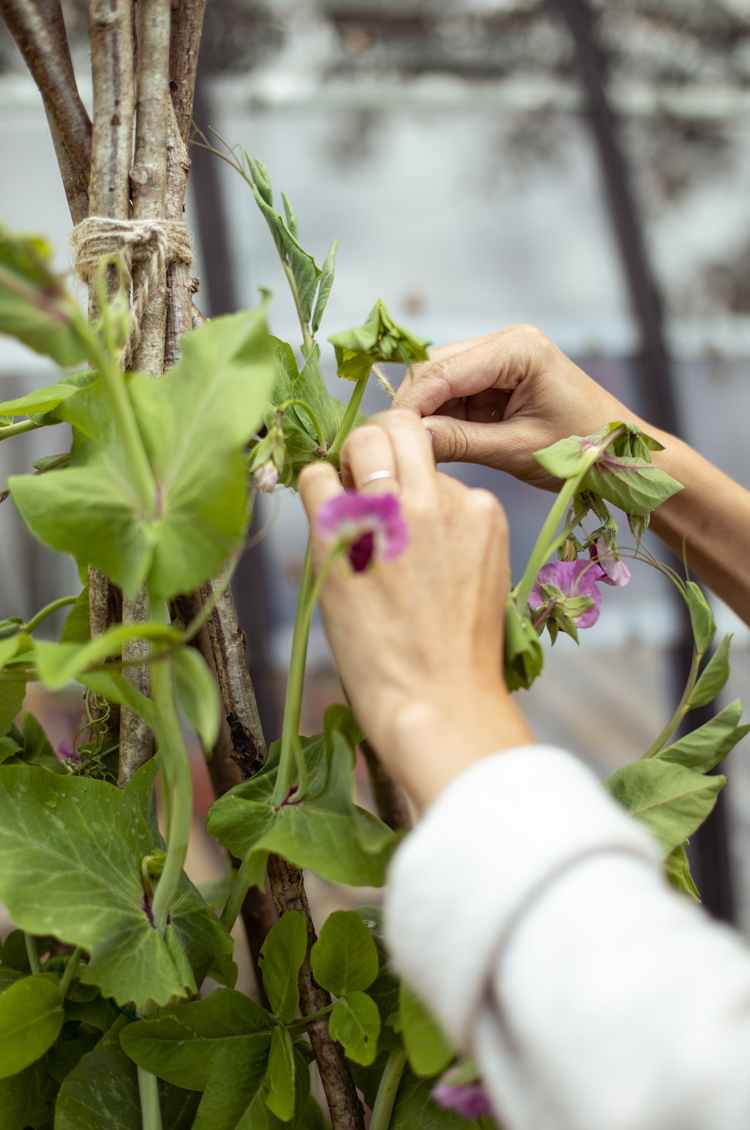 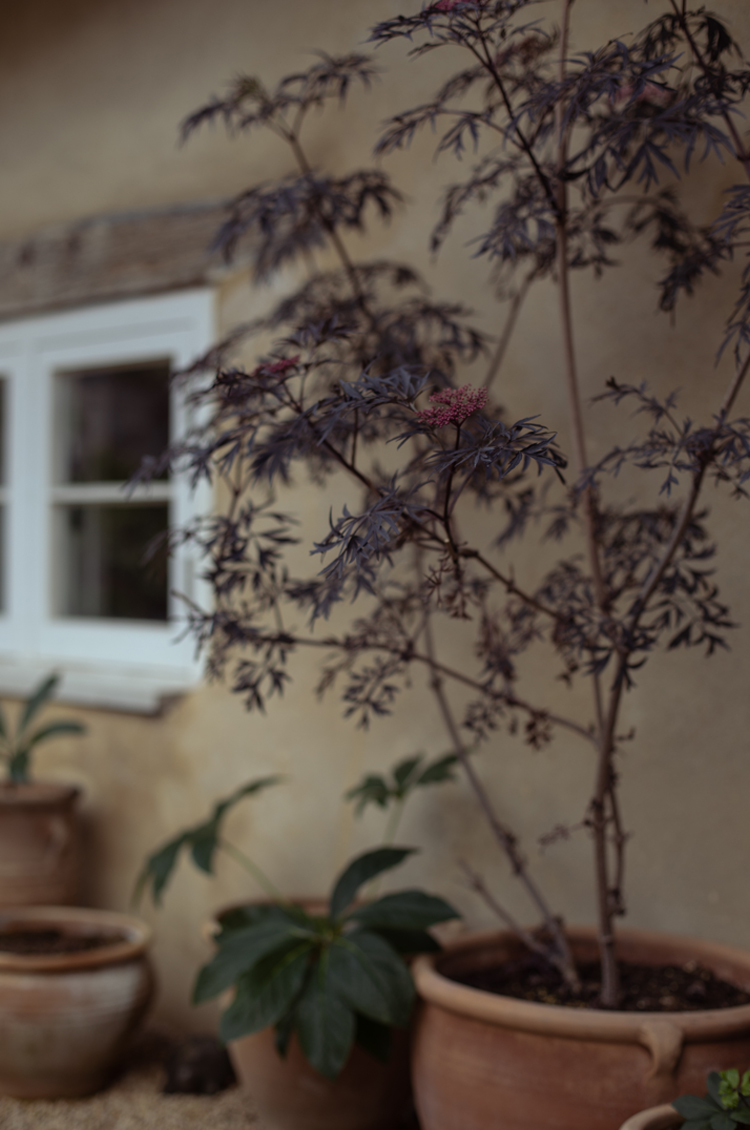 Allium Mount Everest and various thistles add such a lovely texture to the garden while the Marguerite Daisies bring an elegant but wild element. My dad gifted me a magnolia tree that was in need of some care, as it was about to be thrown out at the local garden centre, so that and the Camassia White are now growing in the same pot. 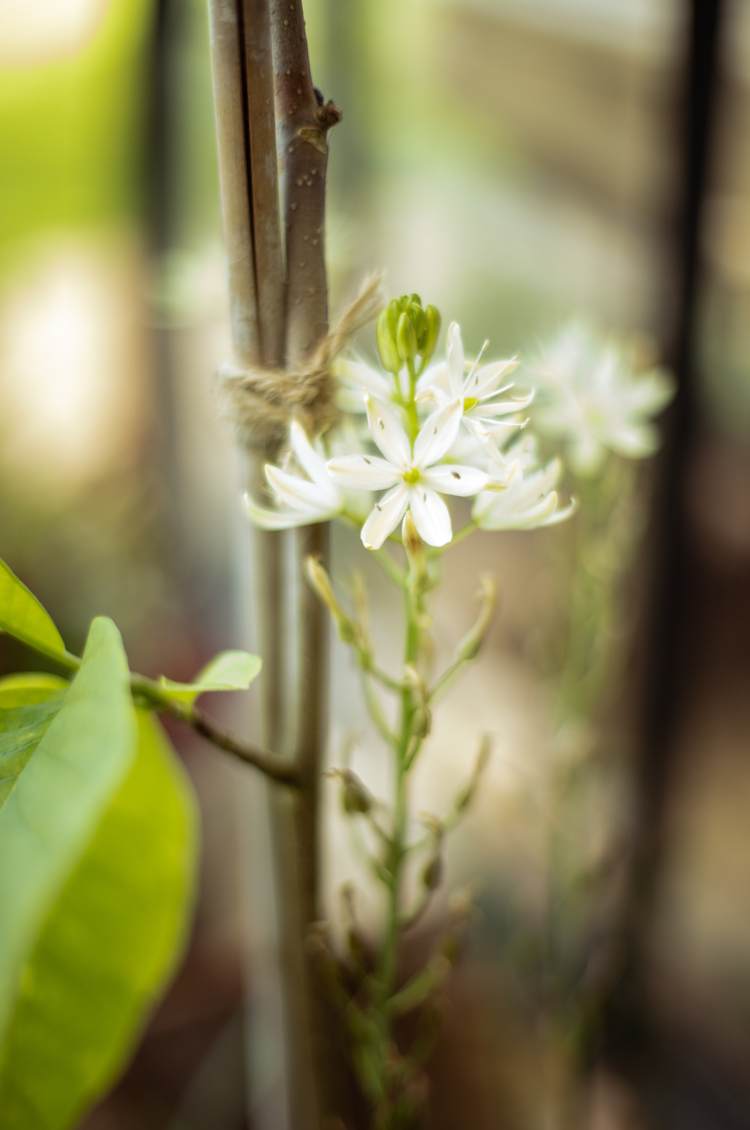 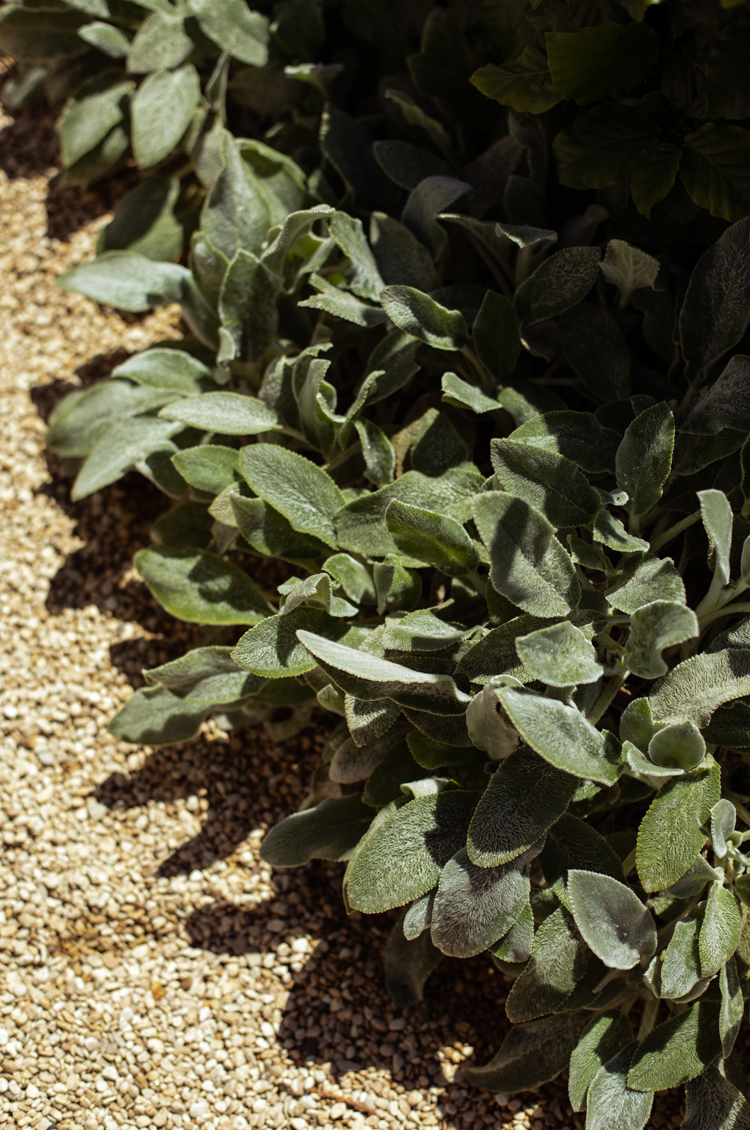 Over in the front garden lambs ears line the gravel path, creeping over every so often – they’re great for stopping weeds as they give such good ground cover. Tthe Delphiniums have started to attract bees this side of the house too.

Nightly watering aside, a garden posey to enjoy indoors has got to be one of the greatest joys of the summer season – particularly cheerful when the British summer inevitably bestows a shower or two upon us. Here’s hoping it’ll hold off for a while.