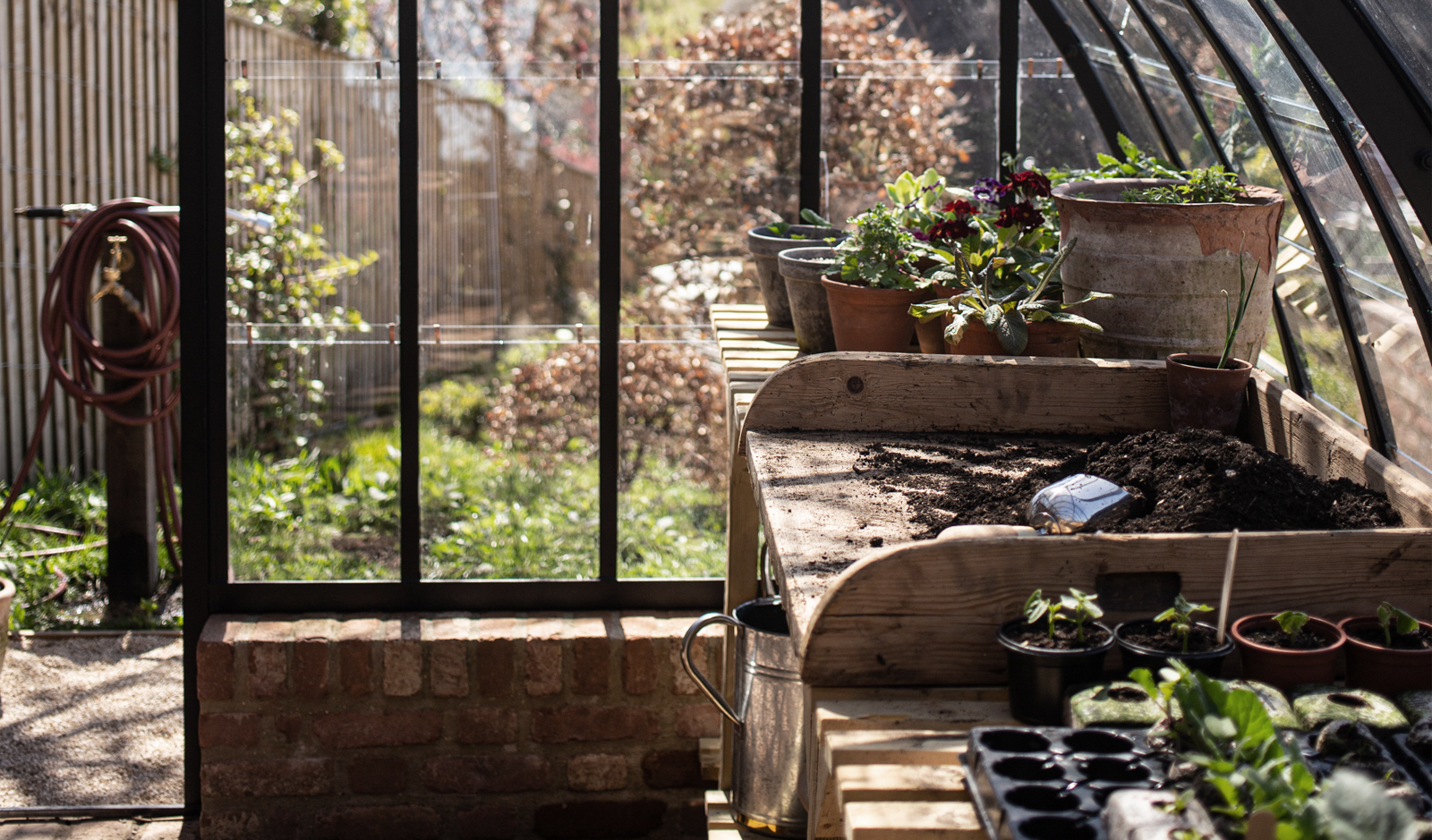 The greenhouse is in! I took that main shot late one afternoon as I pottered about sewing indoors for the very first time; I’ve never had a glasshouse before so it’s all feeling very new and very novel.

For March, I’m working with fruit and vegetable seeds – a mixture of ones I grew last year like aubergines and courgettes as well as new additions like yellow bell peppers, pumpkins, radishes and a mix of tomato types. I’ve been gifted a few that I’ve been excited to try and I’ve enjoyed seed swapping with fellow green-fingered friends in the village. 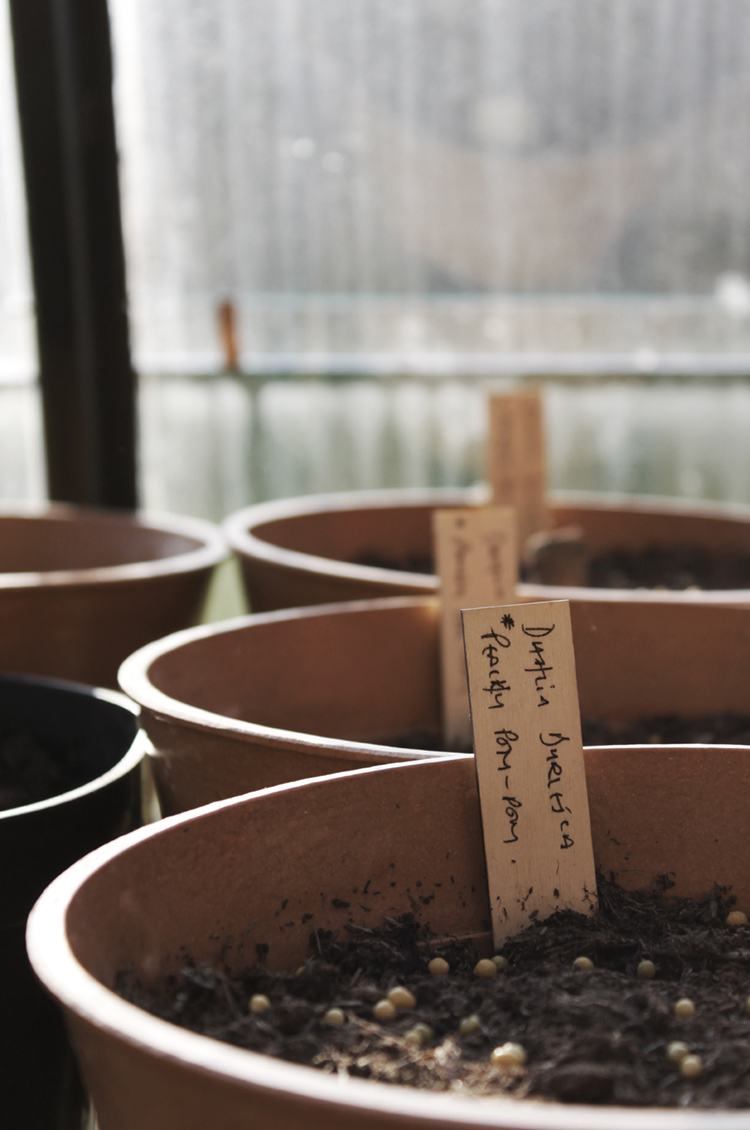 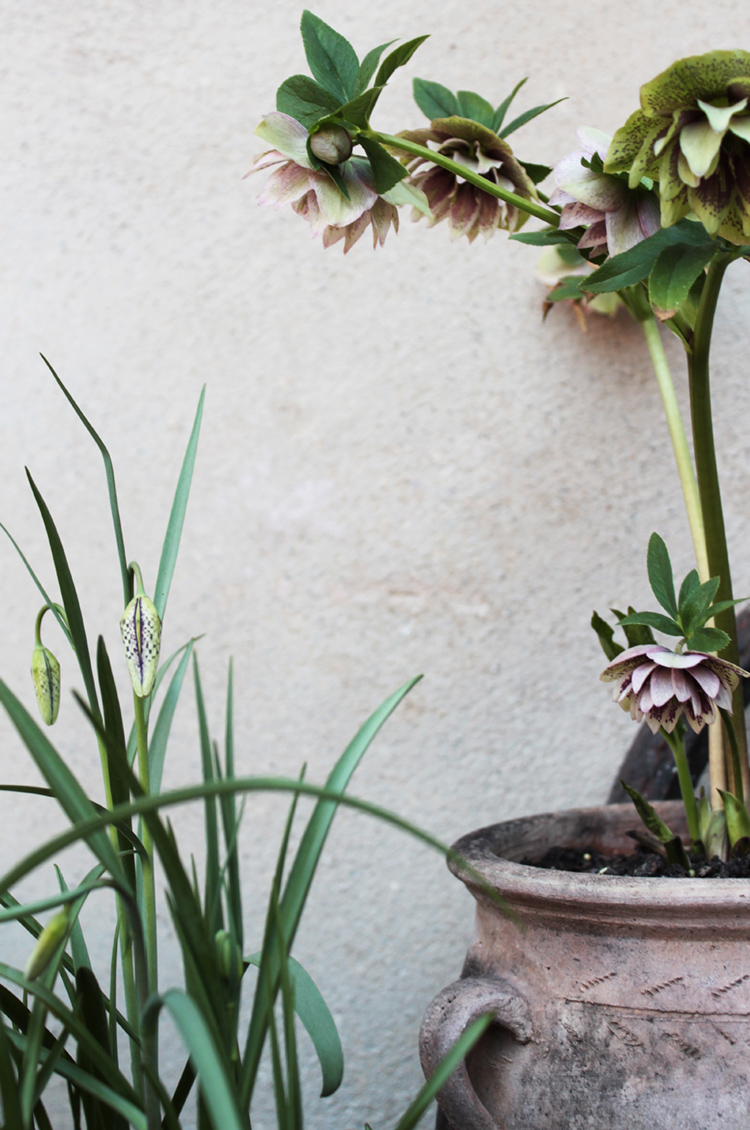 At this very minute, the only ones sprouting are my corn plants which I planted back in February before the glasshouse was ready – the plan is to make popcorn with Alma in summer. I’ve also early sewn one floral – a burgundy sunflower called Helianthus.

What else of March? I know that image with the row of soil-filled pots looks a little boring but my dahlia tubulars have been a big part of March’s garden toil. They’re all in the greenhouse too – I watched a really helpful video by Sarah Raven on how to do them best indoors – and it feels as though I’ve planted hundreds. I got lots as a present for my parents you see but as we haven’t been able to see them, I’ve had to plant all the devils up! I write the proper name on each one so I know what’s going into each pot, but I also write my own made-up name too so I know what they’re going to look like and where to plant them in the garden. So Dahlia Burlesca is Peachy Pom-Pom to me!

March has also been a time for my very-first forced rhubarb too. My harvest is small but I’m really rather proud of it. I put our terracotta forcer over them at the end of last year when the rhubarb was cut back. It’s kept the stalks so soft and a lovely candy pink in colour. I’ve been told they should be so tender you can eat them raw. 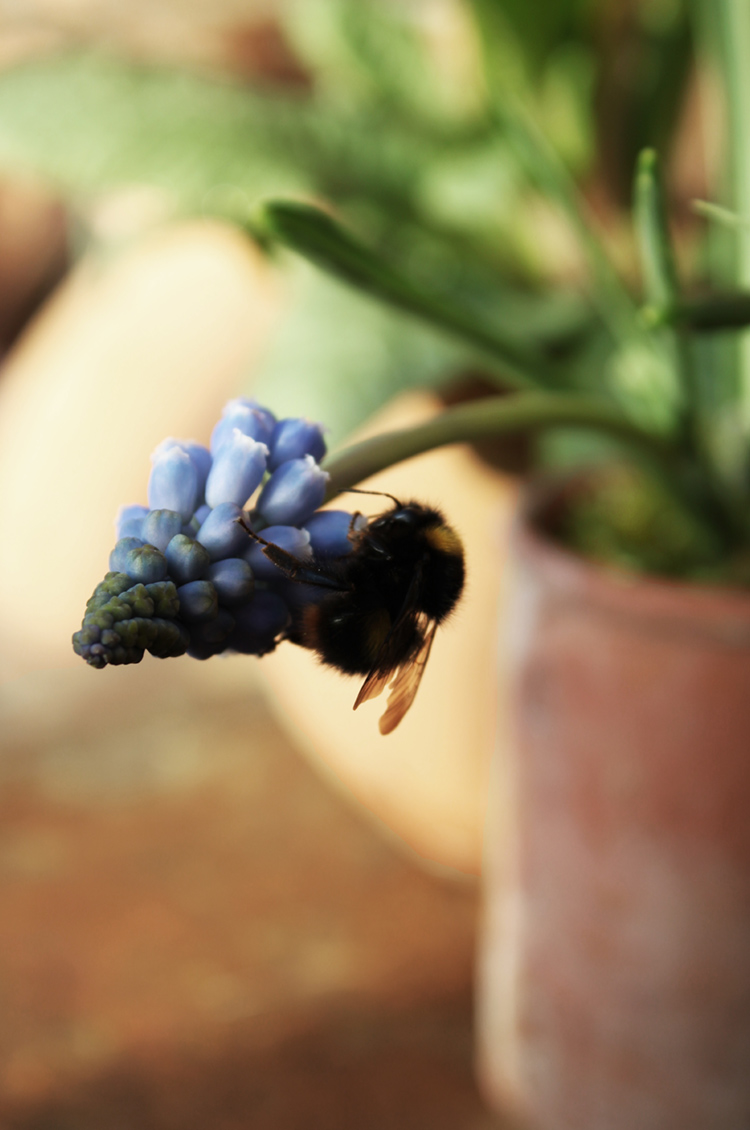 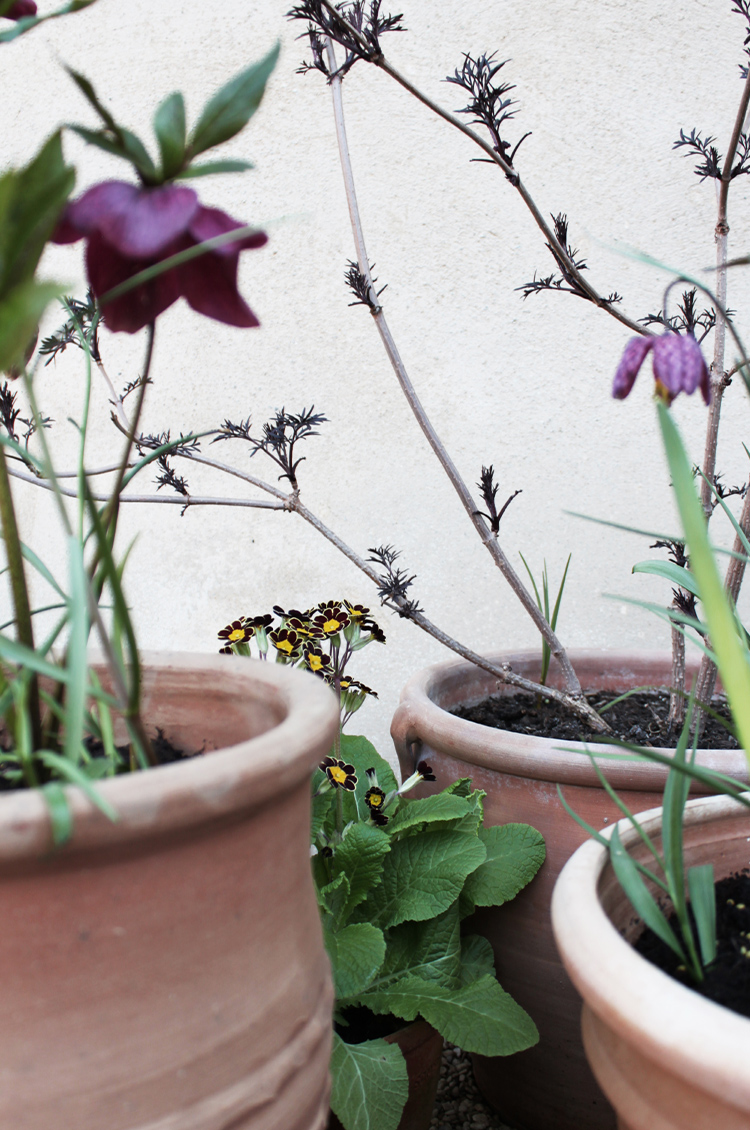 Hopefully you saw the hellebore in an earlier edition over on Instagram, but now it’s beautifully in bloom so I had to share it. I just love this mix against the soft plaster wall and faded terracotta pots and alongside the deep aubergine leaves of the Sambuca Primula and Snakeshead Fritillary.

Back in February I also showed you the beginnings of this Fritillaria Persica. I’ve been busy looking after it this month, building a hazel support before it shoots up. This has been a learn for me from last year where I added support in latterly; it’s far better to do so when a plant is in its infant form. When this one blooms, the flowers should be large and bell-shaped. This one will be ivory eventually but I have the black planted too. 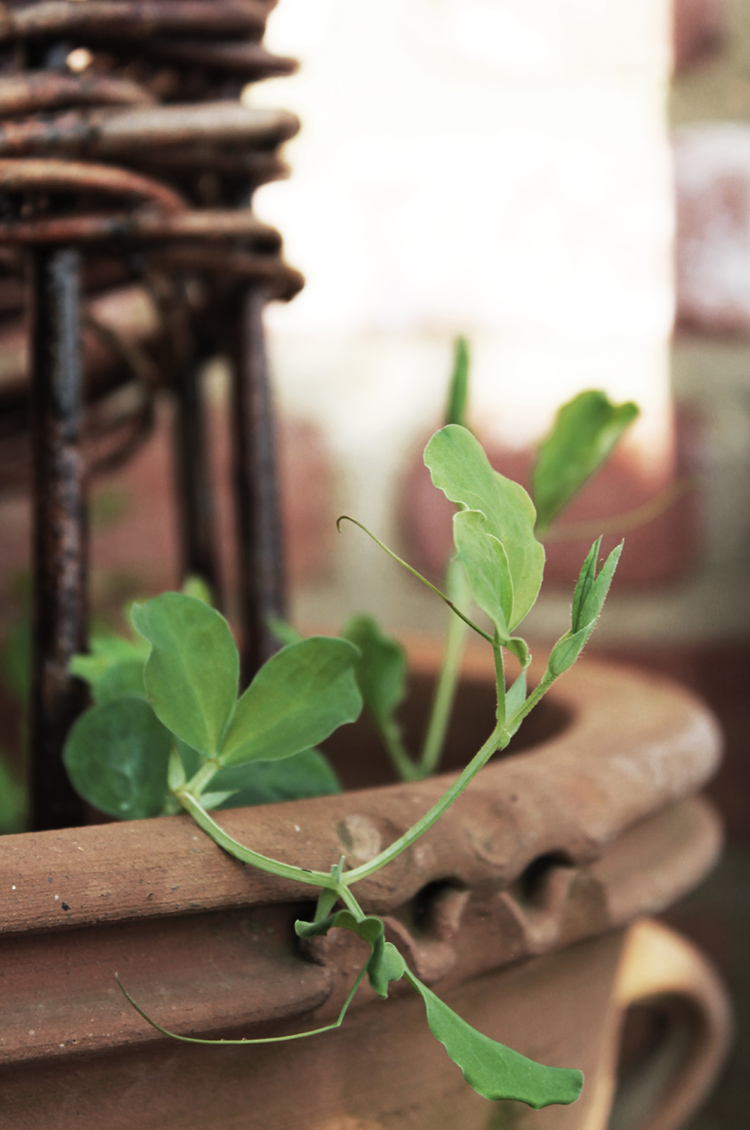 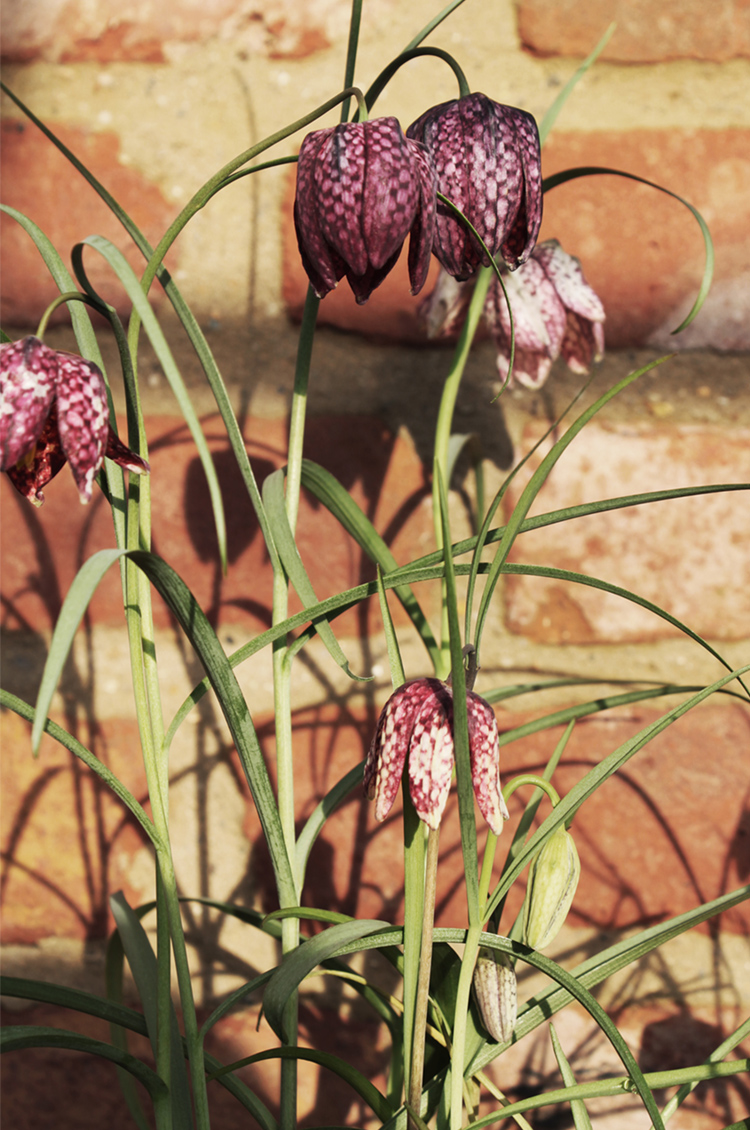 Let me show also you my Grace Alexander sweetpeas that have been moved outdoors. They were part of my Christmas present from the team that I sewed in the cottage over winter and have now moved them into a terracotta pot with one of our willow obelisks for them to climb up. I open the greenhouse every day so the fresh air hardens them – it essentially toughens them up for when the pot goes into the garden in April or May. I’m most looking forward to seeing the Earl Grey sweetpea come into flower.

How lovely it’s been to see the bees gradually coming back to work in March also. One floated into the greenhouse to visit one of my Muscari and it was a pleasure to welcome him in.