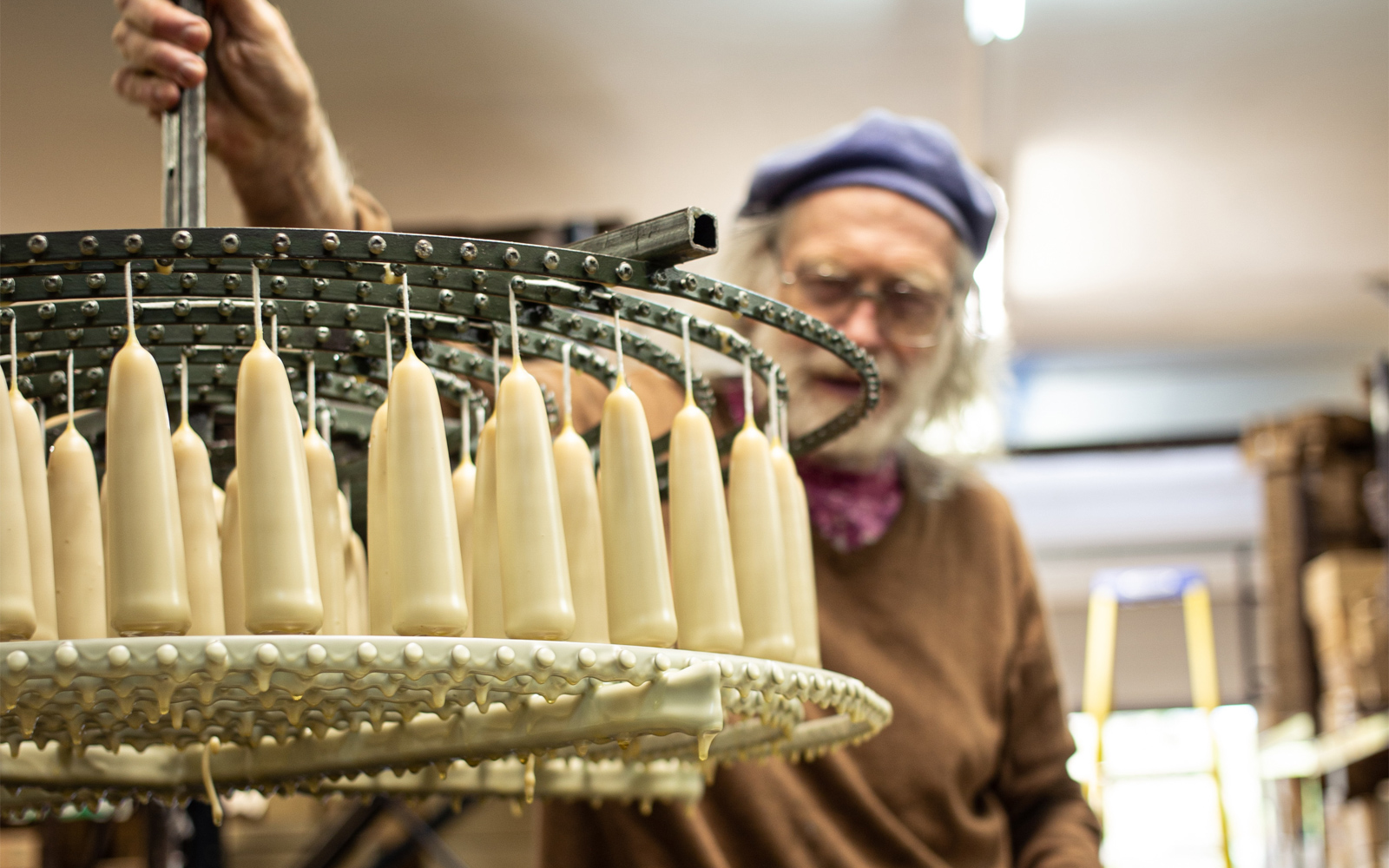 A slow process, a steady process, a rhythmic process where it is most easy to believe how our candlestick makers get lost in their own thoughts when hand-dipping each of our British beeswax candles. It may be within a small Cumbrian chandlery – where the vistas stretch for miles from the summit of the moor on which it’s positioned – but the number of candles that they are able to make within a day alone is quite astonishing. “The process is a simple one, yes, but it takes time to develop speed at threading cotton wicks around a carousel. I remember when I first started and I was all fingers and thumbs and it took me forever, but now, I can do it with my eyes closed. It takes even longer to develop that instinct of knowing when you’ve done a sufficient number of dips for a candle to be at its designated size – though we use a gauge too to be absolutely certain our candles share a consistent diameter,” explained Rory, one of the candlestick makers.

Rory’s hands may be responsible for the dipping of most of our beeswax candles, but it was Ted who founded the chandlery in 1985, using an outbuilding at a local farm as his first workshop. A natural creative, once upon a time in the 1960s Ted was selling his own marbled paintings on the streets lining the River Seine in Paris. He told us too how he was arrested for chalking a homage to Hieronymus Bosch on Pont des Arts…  Later, he spent time across Europe working as a baker (but never a butcher) in Amsterdam and a joiner – anything that required artistry and the handmade. But, it was a sculptor friend of his who opened his eyes to candle-making. Kurt made candles for extra income so that he could maintain his self-sufficient lifestyle on a commune come farm in Norway. He got his dipping rigs from the Smith at Kristiania, the famous alternative community in Copenhagen, and was dipping into an old oil drum when I first met him. Candle-making therefore, was a skill Ted practised and learnt by trial and error rather than one that he studied or was passed down to him. “Kurt said it was a simple process but I got it all wrong. I didn’t get the wicks right, the colour was off and I sent them off bundled in newspaper and they arrived broken. So there wasn’t much I got right at all at first you could say!” laughed Ted. “But then I got the hang of it and I started trying things with different types of wax, different melting points, different wicks (he ended up favouring some sourced from Spain that have two cotton wicks plaited together to lend a longer, more even burn). That’s when I turned to beeswax and had a go with that from a beekeeper friend of mine. He gave me a big old ice cream churner thing too that I used as my boiler.”

Today, Ted and his small team of candlemakers make by hand beeswax candles of varying colour and character, like the Zambian beeswax candles they make for a charity that carry a stronger honey scent and colour. He showed us some and to us, they smelt almost tobacco-like, which Ted told us is because of where they forage and how that informs the fragrance of their honey and their wax. But for the candles in our collection, he uses purely British beeswax that’s golden yellow in colour, sourced largely from Yorkshire. “Beekeepers recommend other beekeepers and so you end up with a few that you go to, like a little club I guess. I’m a hobbyist beekeeper myself but I only have four hives; it usually takes 10 tonnes of honey to produce 250 kilos of wax, so I’m nowhere near the scale we’d need. Bee farmers however manage dozens, hundreds and up to 2,000 colonies. They mostly move their hives to help pollenate different crops, and at the end of the season take hives up onto the heather, and many are in touch and mostly help one another.” Ted told us, offering us a jar of homemade honey to take home, insisting we use it on bread to enjoy it most.

We reach a point where we stop asking question after question and instead, watch as Ted and Rory take it in turns to ‘wick up a dipper’ (in other words, thread a continuous strand of Spanish cotton wick around the multi-arm contraption – made locally by a blacksmith called Bob – that will then be dipped into the vat of molten beeswax), climb the few steps to the edge of the wax pot, and dip in the wicks for just a few seconds. They’re then slowly released, letting the excess wax drip off, before the carousel is rotated and the wax is left for a few minutes to firm up. In the meantime, it is the turn of another dipper to be dunked. And the process repeats. We asked how many dips it takes for our short candle. “In the region of 60 dips,” said Rory. “No, that’s not right. It’s more like 45,” corrected Ted. The two of them tussled before settling on 45 or so dips and perhaps 20 for our slender dinner candles. One thing they did agree on however was the benefits of using beeswax over oils. “It’s got everything. The colour, the delicate scent, the uncomplicatedness of it all – how nice is it that there’s just one ingredient in here that’s natural? How often do you see that these days?” pondered Rory. The answer? Not often, which is just one part of what makes them, to us, so very special. 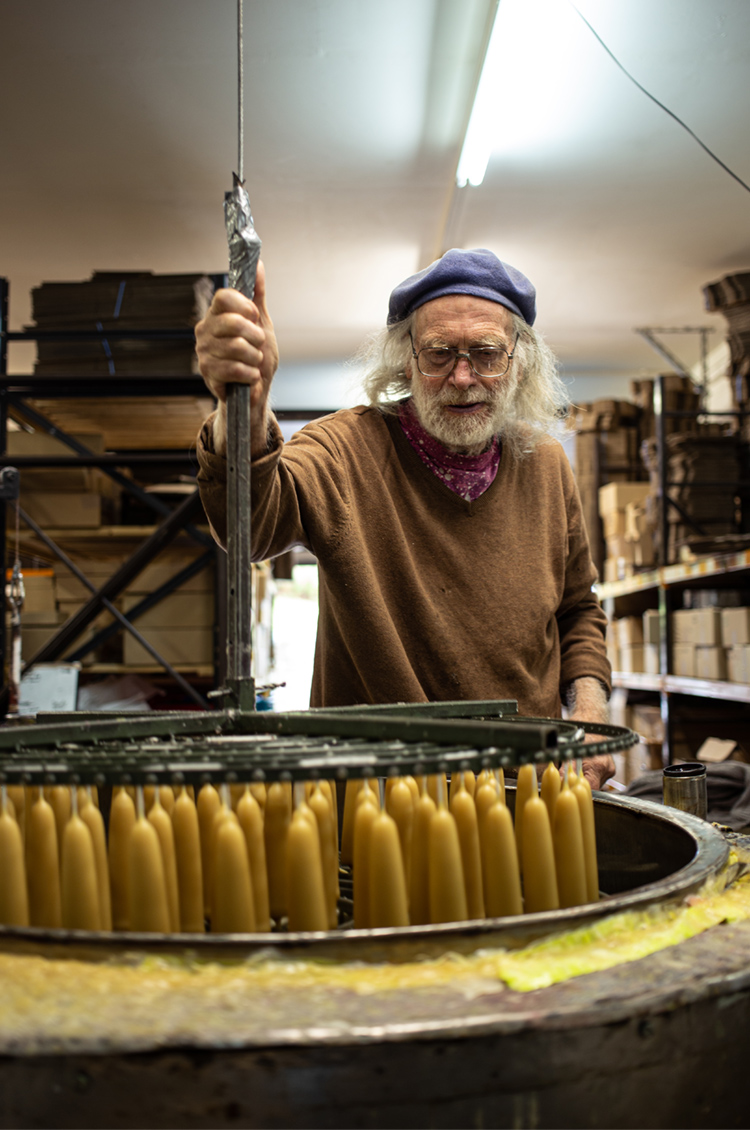 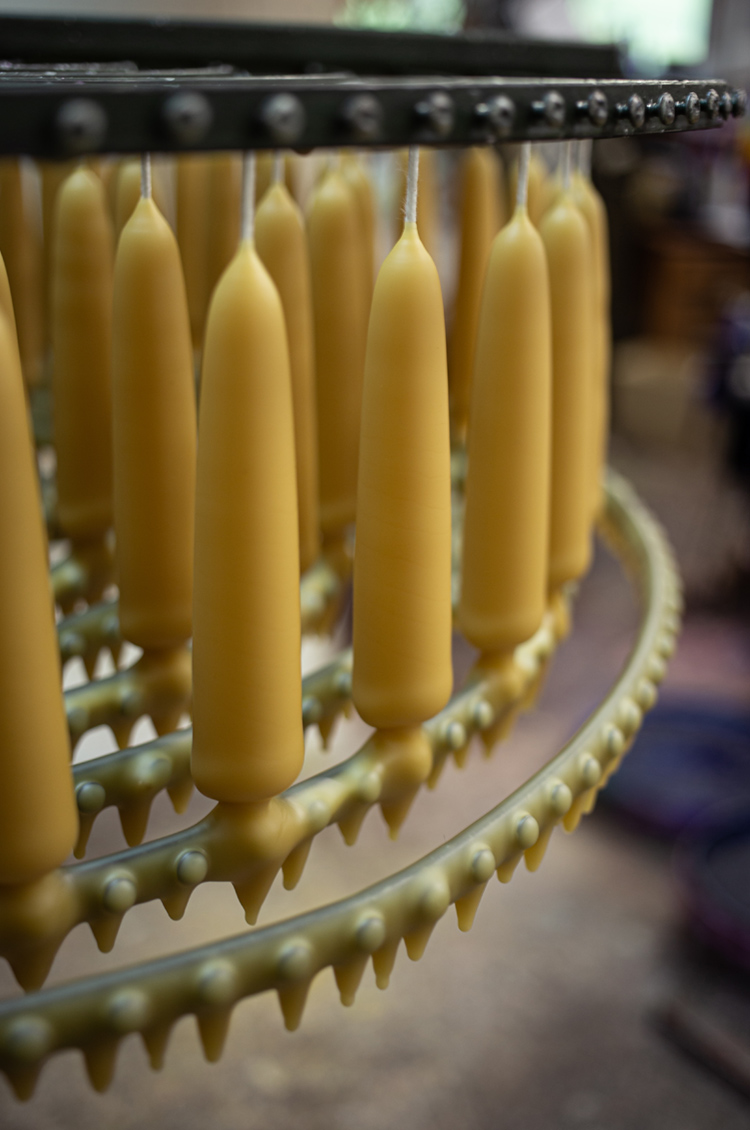 Festivities on The Farm